what should be in your cosmetic pigments

When it comes to permanent makeup pigments, you want to make sure you’re getting the best color and pigment for your skin. That’s why our founder, Sandi, has been researching these permanent cosmetic pigments for more than 30 years to help find solutions for the color problems that are present in the industry.

Do you think your eyes are your best feature? Do you love your eyes? Do you find that getting your eyes to look acceptable in the morning is a challenge? You can now remove that stress from the beginning of your day with our permanent makeup eyebrows.

A well-trained permanent cosmetic technician quickly acquires the necessary skills to perform the most basic procedures. However, without quality permanent makeup pigments, the results are never satisfactory. Satisfied clients and attractive results can do more to ensure the success of a technician’s practice than the most skillfully crafted marketing plan.

Pigments Past and Present:
A Colorful History of Permanent
Cosmetic Pigments.

Allergic reactions, color absorption, pigment migration, and changes in pigment color have always been the concern of every technician. Technicians must now also be aware of the ferromagnetic properties of some permanent pigments’ ingredients, which may increase risk by exposing their clients to painful and potentially dangerous burns if they undergo magnetic resonance imaging (MRI) or a CAT scan.

The iron oxide compounds typically found in inexpensive pigments are approved by the FDA for use in foods, drugs, and cosmetics that are applied daily; but, these ingredients are inappropriate for use in permanent cosmetic applications.

The use of Iron Oxides in permanent cosmetics may only be due to its extremely low cost and its approval by the FDA for use in foods, drugs, and conventional cosmetics; this allows unscrupulous manufacturers just enough legal license to deceive the public into believing that their products are approved for use under the skin.

Iron oxide is a binary compound consisting of iron and oxygen, most commonly seen as rust, hence the colors it bases such as reds and browns. Iron oxide-based pigments implanted in the lips or brows will sometimes disappear in a few days or worse, turn pink or purple in a few months. Pigments are no more magical than the ingredients that build them; therefore, it is nonsensical to believe that implanted pigment could perform a disappearing act.

The inexperienced technician will too often blame their technique for lack of a better reason.

Mapping the mechanics of a permanent cosmetic procedure, Dr. Narayan Hosmane, professor of inorganic chemistry, theorized that iron oxide broken down is both iron and oxygen, which are elements that are common to the hemoglobin found in human blood cells. The dermal layer of the skin is lined with blood vessels. When iron oxide or any pigment is implanted into the blood cells, it is interacting directly with the hemoglobin in each cell. The body, performing its natural functions and processes, does not distinguish iron in pigment to be any different from iron in the blood and accepts part of the iron oxide base into the blood vessel. Therefore, part of the pigment base is absorbed by the body as it would a Geritol iron supplement. The remaining cosmetic color will disperse in the dermal layer either leaving a faint pink discoloration or disappearing completely.

Technicians seeking natural pigments must understand that any natural pigment can be processed through the blood, much like food and therefore cannot be used to achieve a permanent color. Any technician performing procedures with iron oxide pigments is doing a disservice to themselves as well as their client. The client is paying a large sum for a procedure that will not be permanent and the technician is wasting valuable time doing repeated touch-ups.

Permanent cosmetic enhancement can be one of the most lucrative services the beauty industry can offer; it has the opportunity for enormous growth. However, technicians who insist on using inferior pigments may see the business opportunities vanish along with the pigment they implant. 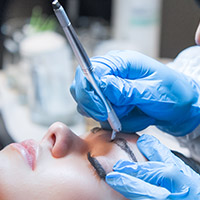 During the FDA’s annual Science Forum, Dr. Linda Katz, M.D., M.P.H., Director of the Office of Cosmetics and Colors, presented an overview of allergic reactions to permanent pigments through a historical perspective.

“Allergic reactions and photosensitivity were a problem with the inorganic (i.e. iron oxide) pigments as were color challenges. These problems prompted a need for new pigments. Many colorants used in permanent cosmetics and tattoo formulations are manufactured for industrial purposes and too, there are a wider variety of organic pigments being used and also different grades, which is leading to more contaminants in them. This can lead to unknown identity and unknown safety issues.”

William Lowry, PhD, toxicologist and consultant to the Alliance, explained that “Nickel is a widely known allergen. Nickel can and has been found in both inorganics and organics.

Masja Straetemans, Ph.D., Epidemic Intelligence Service Officer for the Center for Disease Control recommended manufacturers test products for the presence of metals that are commonly known to result in allergic reactions. “There is a need for allergenicity tests of ink shades before they are released to the public. And people with a history of allergies should consult their doctor prior to having a tattoo.”

Manufacturers of permanent cosmetics need to understand there is a need for different pigments used in the face because the face is more sun-exposed than other areas of the body. Sun exposure can lead to phototoxicity and photo allergenicity. 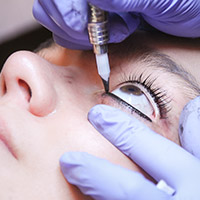 The Need for Stabile Pigments

Bhakti Petigara, Ph.D., from the Office of Colors and Cosmetics, additionally said, “Historically, iron oxides were used in permanent makeup tattoos. But there was a need or a desire for more stable pigments,” said Petigara. “And that is because iron oxides fade and change color over time. Organic pigments are used because they are more stable than iron oxides. These organic pigments are used for plastics and paints and they are known to have brighter colors and a wider range of colors. The safety has not been demonstrated for these pigments and they are manufactured for purposes other than contact with the skin.” 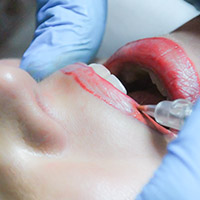 Some Alliance members argue the FDA assertion of MRI burns associated with iron oxide pigments is inaccurate. However, the FDA states there has been no safety demonstrated regarding MRIs and iron oxides.

“The pigments that react during an MRI are all iron oxides,” said Anderson. He further explained that iron oxide particles migrate to the lymph nodes, where they “light up” during an MRI. 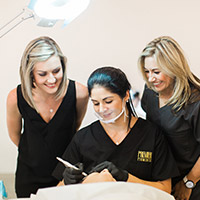 It is easier to formulate eyebrow colors from iron oxides because they are mostly brown and flesh-colored in nature. But the idea that permanent cosmetic vendors think that iron oxides are “hypoallergenic” and therefore, more safe just because they are FD&C approved is a misconception. One recent claim from a vendor said, “Iron oxides are FDA approved for uses in food, drug, and cosmetics and therefore hypoallergenic and safe for use in permanent cosmetics.”

"Not true!" Says FDA’s, Dr. Linda Katz, M.D., M.P.H., Director of the Office of Cosmetics and Colors. “There are no pigments that have demonstrated safety. The FDA does not approve of any pigments for use in the skin.”

Petigara of the FDA cited similar claims on numerous websites; “There are misleading websites and misleading information. People are misinforming the public and implying FDA approval.” Here’s a quote taken from a tattoo pigment manufacturer’s website:

“We research scientific articles on bone repair, plastic surgery, orthodontics, body modification and other medical uses of polymethylmethacrylate but PMMA is what makes this ink absolutely safe and gives this ink its FDA approval.”

Petigara said, “It makes no sense. Just because it was approved for medical uses does not mean it is approved for tattoo inks. This is misinforming the public and its users.”